Founder, Chairman and the Managing Director of Shalby Hospitals, Ahmedabad

Dr Shah saw his grandmother suffering with arthritis since childhood. At that time there was no definite cure for arthritis in India. Doctors used to just prescribe painkillers.  During his residency also, he used to feel handicapped- unable to do nothing beyond prescribing analgesics to the hoards of patients lining up at the OPD everyday. “I always thought of the ways that I could do more for them. So within 3 months of MS Orthopaedics in Ahmedabad, I enrolled himself for higher training at Ormskirk and Wrightington Hospital, UK, for two and a half years, and later worked in the USA. An then I return to India to begin surgical practice by establishing 6- beded Shalby Hospital in Ahmedabad in 1994.

A revolutionary and trendsetter

He is recognized for developing the OS Needle (Orthopaedic Surgeons’ Needle) which can pass through both bone and soft tissue easily so that an orthopaedic surgeon can finish repairing bone and soft tissues quickly. It is claimed that this invention has greatly reduced the surgical time in Orthopaedic surgeries.
He could further reduce the length of surgical time, rather dramatically from 1 hour, 20 mins per TKR to around 10–12 minutes using the "ZERO Technique" invented by him . The ‘zero technique’ is a TKR surgery procedure with the minimum of every invasive step. It is done with a minimal incision and minimum exposure. This results in the minimum of surgical time, exposure, hospital stay, drugs, side effects, blood loss, stress on patients and relatives and so on.

According to Dr Shah, earlier in 1994, when he founded Shalby Hospitals, a TKR patient had to stay in hospital for 15-20 days after surgery. The surgery took about 2.5 hours. That duration was brought this down to 5 days of stay and 30 minutes of surgical time in 2007. Now with the ‘zero technique’, says Dr Shah, the surgery time has been reduced to about 8-10 minutes, a revolution in surgical history. The ‘zero technique’ involves prior planning like implant selection, planning surgical techniques, anaesthesia, analgesia and patient counselling.  Patients who have undergone TKR by ‘0’ Technique begin walking in a few hours and climb stairs on the day of surgery, if they are operated in the morning. Such mobility was achieved after 1-2 day in the early nineties.

Why the name, ‘0’ zero technique? “Because everything comes to almost at ‘0’ level, be it surgery time, method, recovery, hospital stay, drugs, blood loss, patient and relatives’ mental stress etc. Even the need for blood transfusion is minimized,” explains Dr Shah.
Dr Shah also claims to be the first to incorporate ‘Class100’ operating rooms with laminar airflow and HEPA filter systems in India. These reduce the infection rate. He was instrumental in starting medical Tourism in India. In the year 1997 he operated upon a patient from UK Scotland at his hospital in Ahmedabad. From there, his hospital went on to win the Gujarat government’s Medical Tourism Awards consecutively in 2016, 2017 and 2018. . “As Indian facilities offer a cost advantage over facilities in the West, we get many more patients than we would otherwise,” he says.

Dr. Vikram Shah has created a team who has performed has so far performed over one lakh joint replacement surgeries .He & his team performs around 600 joint replacement surgeries every month. Shah has become something of a legend in Ahmedabad where anecdotes about him abound. Setting to rest all speculation about how he manages so much stress, he said, “I work with a team of 20 people, all of whom are highly efficient. The team works on the pre and post-operative procedures of each surgery while I perform the actual operation which takes about 20 minutes. I take a break after performing five surgeries back-to-back.”

ON TOP OF THE WORLD

In 2008, Dr Vikram Shah performed 3,000 knee surgeries, thus crating a world record, giving no leg to stand on to his closest peer in the world, a UK surgeon who carried out 1,000 surgeries in the same year. Shah, however, is not exercised by the figures that have fractured records.
“In the first year after I returned to India, I performed only 14 surgeries, the next year 18, and the year after that 100,” he says. “The number has continued to grow after that. Word-of-mouth publicity is the only thing that works for a doctor; it gives patients confidence in the ability of the doctor.”
“I do not want to talk about my achievement. I want my work to speak for itself,” he told DNA in an exclusive interview. “….I conduct about 16-17% of total TKR done in India…,” he claims. Indeed, Dr Shah is unassuming for a man who puts a significant proportion of patients from the world over back on their feet.

The surgeon’s efficiency is evident not only in his surgeries but also in the way he attends to the smallest operational detail of the hospital. He says he works to strengthen brand Shalby and not Vikram Shah.

He has been awarded with ‘B C Roy International Award’ for his work in Joint Replacement Surgery.
He is the only Indian surgeon to be selected on the Board of Designers of Zimmer Inc., USA. and the only faculty invited from South East Asia Joint Replacement conference at London. He has been showered with hoards of awards for his achievements-

Innovations are perhaps the foundation of Shalby’s success. Some of the innovative ideas which are a part and parcel of Shalby’s School of Thought are:

Bone Bank: Bones from TKR are harvested and preserved. Such preserved bones are used by other orthopaedic surgeons to fill huge gaps in bones in other patients.
Large Joint Inventory: On many occasions Shalby’s large inventory of prosthetic joints has helped other hospitals.
Joint Replacement Registry: This is a record of patients undergoing joint replacement and helps in statistical analysis and Surgical Research.
Shalby ‘We Care’ Program: All senior staff members not related to clinical department visit patients to ask after their well being and offer help where needed.
Friends of Shalby Foundation: A non-profit organisation which conducts health awareness lectures and free check-up camps for the needy Shalby Times: It is a patient-centric magazine which guides patients about the latest and the best treatment options.
The future?
“I want to make TKR a daycare procedure!” 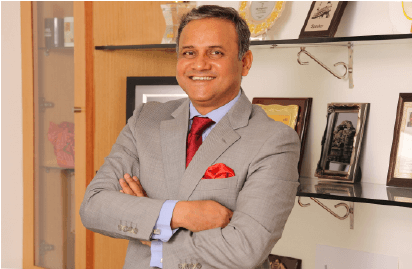